I’ve long been a critic of smart phones that don’t work well.  I, as others, use as the model of elegance, ease of use and overall customer satisfaction Apple’s iPhone.  Everyone holds up iPhone as the poster child for doing it right with phones. 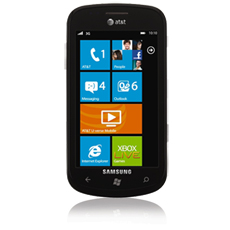 Now, I’ve had a brief hands-on with what is, arguably, the flagship (to date) among Windows Phone 7 devices.  I am coming around, liking it more and more.  Right away, however, is something that does not make me happy.  The MicroSD expansion slot can accept cards up to 32GB. Add this to the phone’s generous built-in 8GB of memory for a respectable 40GB capacity. Now, the downside. Once installed, the memory card may not be removed without doing a hard-reset of the phone.  What?  On all other phones I know about, that is, non-Windows Phone 7 handsets, users may remove and re-insert a memory card at will, with the handset off, that is. I suppose it will not be a big problem, so long as I do not want or need to install a larger card or remove it and connect to my computer for adding files.  But from the get-go, why (I ask of Microsoft) did you do this?  Was it absolutely necessary?

To be sure, this and other Windows Phone 7 handsets are made for Windows users, and not for Mac users, so, in short, for now at least, Mac users need not apply.  Fortunately, I am computer ambidextrous.  I’ll use this one with my Windows computer, currently Windows 7 running on my Mac Pro and on a MacBook, plus a borrowed Windows 7 laptop.

Also, it seems that Microsoft has abandoned all hope that a Mac user would buy and fully use a Windows Phone 7 handset.  Sure, there is beta software for certain synchronization with Macs, but it is far from robust.

And then there are the apps that also make it virtually impossible to use Windows Phone 7 with a Mac.  I wanted to download apps

The plus side of the leger is deep, however, and that is why I am reporting to you. I might as well also get this out of the way – though other phones are cool, whether they be iPhone or the latest Android handset, I can honestly recommend this Samsung Focus running Windows Phone 7 to students and the rest of you.  You need not be a geek to like this phone!

Buying it now and using it now is going to be at least likable. Better news is that this and other eligible Windows Phone 7 handsets will be upgradeable for FREE in the fall with the NEWEST OS version, dubbed Mango.  Read about it and watch the video.  Impressive, isn’t it?