magicJack PLUS, $70, builds on the success of the original product. I have had nothing but success with the original, be it connected to a Mac or Windows PC.   One year of service is included, with one-year renewals costing $30 and five years for $100. 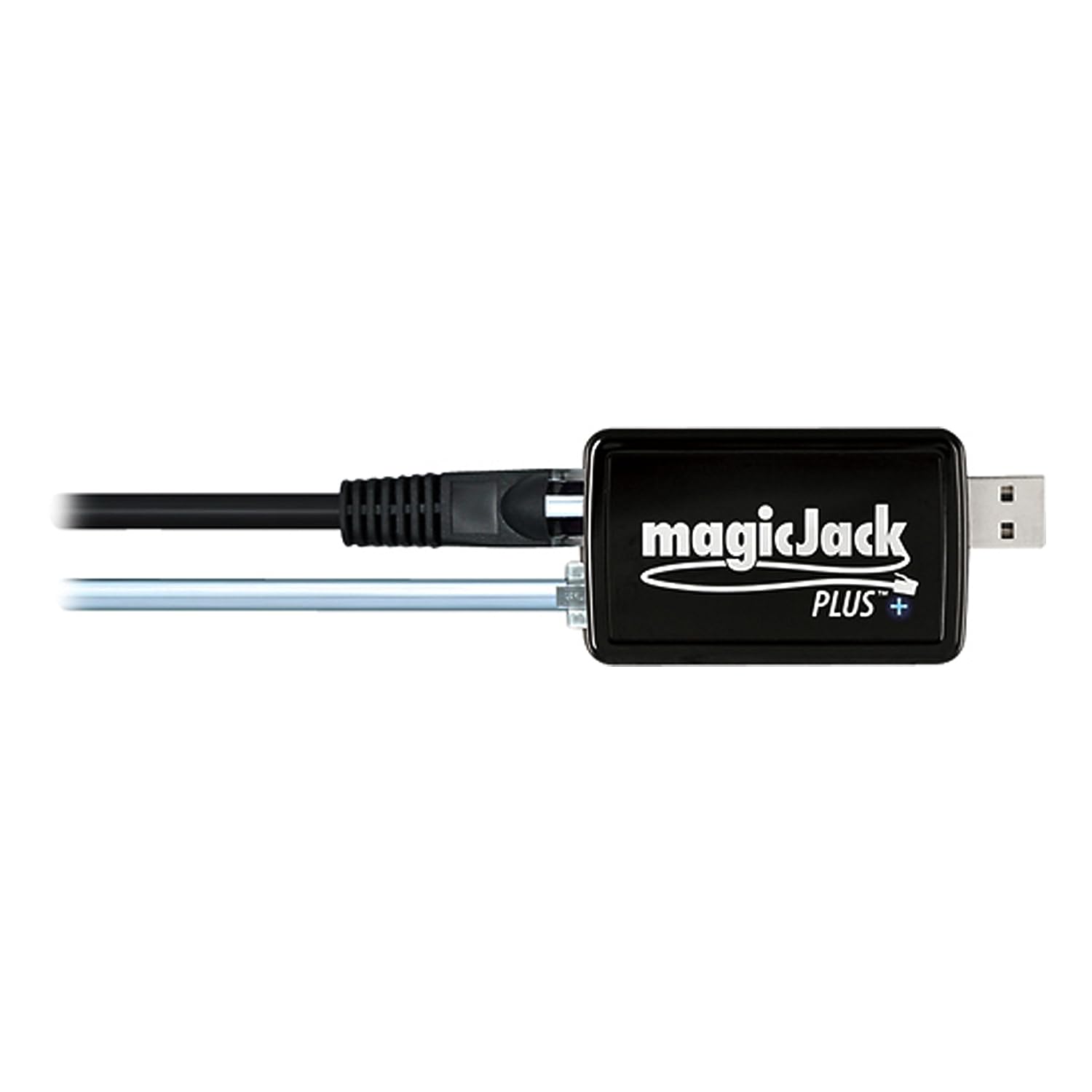 I know the original magicJack was promoted using the world’s cheesiest marketing campaign on their Website. Not much has changed with the marketing, and the PLUS works as well as the original with added functionality.  There is nothing not to love!  Let me explain, first by directing you to my original magicJack review.  Then come back to read about magicJack PLUS, please.

magicJack PLUS is distinguished by its ability to directly connect to a Mac or Windows PC (that must be always on to operate magicJack, as was the original) AND it can be directly connected through a router, removing the computer connection from the equation.  This seemingly small connectivity change is really a HUGE change for the better.  Connected to your in-home or small office router, magicJack PLUS is always on, always ready, and operates transparently as if connected phones are plugged in to the good old phone company.  Like those old phones, assuming you have Internet service up and running, your phones will always have a dial tone and operate as expected.  It’s just that simple.

PLUS setup is similar to the original.  First, plug it into your computer, register the device, setting it up for YOU as the user, clicking though the prompts.  Users will have the choice to get a new number in their area code, if available, OR to keep an existing number (called number porting, for $20).  So long as the company has that area code in its database, users should be good to go with keeping the original number. This may be done later, too, through the Website.

Once set up and registered, magicJack PLUS can be disconnected from the computer and plugged into the router, using the supplied USB power adapter.  Users may connect the supplied short Ethernet cable from magicJack PLUS to an available port on the router OR, as I did, use my own longer Ethernet cable from that port to the router.  Finally, there is the RJ11 phone jack.  User may connect any standard corded or cordless phone.  In our tests, we chose to use a Panasonic DECT 6.0 Plus cordless system, the base of which plugged into magicJack PLUS, and then the other cordless handsets and their respective bases deployed throughout Gadget Central.

Take magicJack PLUS along during travel anywhere in the world. Because the device works so well, with Windows and Mac software automatically downloaded when the device is plugged into a host computer, wherever travel takes the user, magicJack PLUS and its dedicated phone number will also work anywhere.  When traveling and where there is Wi-Fi, take along an under-$20 corded handset to plug in the RJ11 phone jack on magicJack PLUS OR use the software as a “soft phone” on the computer with built-in microphone (on virtually all new laptops) and speakers.  Users may also opt for plug-in microphone and earbuds, the same set-up many use for Skype calls.

Performance has been boring.  Everything operates as it should. All the features work as advertised.  Sound quality is good to the extent that NO ONE has commented negatively about it.  When I have called in to sample audio quality in that way, it sounded perfectly fine.

If the user’s Internet is down, that is, not functioning, calls go to voicemail.  I wish there was a failsafe number to which calls could automatically be forwarded, but one cannot expect perfection at this price.  Call forwarding works, however, so if Internet is down for an extended period and if the user can access the user account, forwarding to any number can be set and activated as easily as it can be turned off when normal functionality returns.

In addition to the magicJack PLUS set up here, I also sent one in January to an overseas tester.  The power adapter is compatible with world voltages, from 100-240VAC!  This means that users would need only a plug adapter from the US two-prong plug to whatever is needed in the country where magicJack PLUS is to be operated.  This is a big PLUS!  We’ve been using magicJack PLUS with them ever since, with complete success.  We can call them for FREE as if they are next door.  From more than 10,000 miles away, their US friends can call as if locally, and my foreign testers can call to the US and Canada as if a local call.  In the other country, Internet service is more basic and much more unreliable. Yet, magicJack PLUS does just fine on their barely 3Mbps downstream and 512Kbps upstream service. That, dear readers, is the way things are supposed to be.  magicJack PLUS easily installed on their MacBook and Windows laptop, as well, and works equally well when computer-connected as it does preferably connected to their router.

Another use could be for anyone considering giving up a landline who still wants to keep it AND a long-standing number.  magicJack PLUS provides a way to maintain the old at considerable savings.

Long distance rates are among the lowest around, with calls to most modern country’s land lines at about 2¢ per minute!

Even if simply for a family member or friend who is NOT technically competent, magicJack PLUS can be a real money saver, so why not help a friend by volunteering to set it up?  Then, this user like all others can simply make and receive calls as usual, only for much less money. Be sure to teach the user how to use voice mail!  That’s about it.

The big takeaway is that magicJack PLUS is MORE; MORE convenient, MORE robust and MORE capable.  Sure, the product is NOT as full-featured as higher-cost VoIP solutions, but it IS the best, reliable, lowest cost solution of which I know, with at least the most important features all rolled into it.  Highly recommended!

Buy from the magicJack.com Website or from other online retailers as well as Best Buy and other local retailers as may be found through Internet search.