Most of you are mouse users with your desktop computer and mouse or trackpad users with a laptop.  I get that.  I’ve settled on everyday and inexpensive mice I like for those who want a cordless laser mouse with a laptop, reviewed here and here.  But for desktop use, I am a trackball-preferred user all the way, and this new $130 (retail) and sub-$100 through online shopping SlimBlade from Kensington is just the best ever. In their words, the ball does it all!

What a huge difference this device makes in my computer enjoyment and productivity, not to mention comfort associated with mousing!  And this is even after comparing it with my limited experience with Apple’s new multi-touch Magic Mouse. 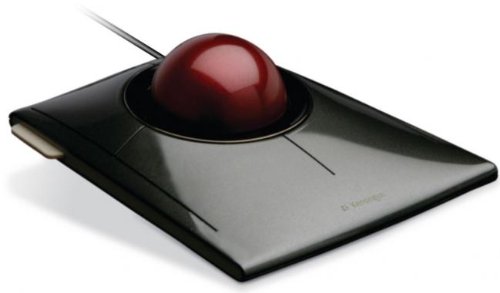 Looks aren’t everything, but SlimBlade looks and performs so comfortably and with such ease and intuitive sense that I just love it.

Let me explain.  As you know, using a mouse involves a certain amount of travel over a certain amount of space, be it on a desk or another surface that is your choice and habit.  A trackball sits stationary upon a surface. The user’s hand manipulates the ball to move the cursor, while the trackball device itself remains in place. At its best, I find this arrangement more comfortable and affording greater control.  Ordinary trackball devices might have the ball itself offset to one side, typically on the left, for right-handed mousing, and with clickers placed nearby to where a user might want to find right and left buttons.

Other products have a separate scroll wheel to engage, with requires that the hand move from the ball to the wheel or somewhere else.

The first order of business when connecting this new SlimBlade Trackball is to download the newest SlimBlade software for your Mac or Windows computer from their Website.

So, you see that the Kensington SlimBlade Trackball immediately makes right- or left-handed mousing easier and more productive, but it does not stop there.

With this product, everything is multifunctional. In addition to the usual left and right buttons that are integrated so beautifully into the base, there are two additional buttons at the top and above the main two buttons.  The top left button is pressed to change from the normal and default navigation mode to Media Mode. An on-screen icon appears momentarily to verify these mode changes.

In Media Mode rotating the trackball adjusts volume and moving it right or left changes from next to previous track. The bottom left button activates play/pause while the right lower button is the stop command.  These and other commands within modes operate in the Mac OS as well as in Windows XP, Vista and Windows 7.

Pressing the top left button again, brings the user back to default Navigation Mode with all the usual controls as normally found.  We’re not quite finished with the tour!

The top right button converts the device to View Mode, which most users will find to be quite useful in both Windows and Mac versions of many popular programs; Adobe Acrobat, Adobe Photoshop CS3, Adobe Photoshop Elements, Microsoft Excel and Word, Apple Numbers, Safari, Pages, Preview and even in Firefox for both Mac and Windows, and more.  The ball rotates for zooming in and out and moves in four directions for panning on a page.  The bottom left button sets the displayed page at 100% while the bottom right button sets what is displayed to fit the page width, such as in Word.  Clicking the top right, the View Mode button again brings the SlimBlade back to standard Navigation mode.

In practice, SlimBlade Trackball has easily and fast become the extension of my hand and arm that had been hoped for and expected.

Kensington SlimBlade Trackball is covered by the company’s five-year warranty.  As a Kensington trackball customer since their original Version 1.0 in 1986, I can attest to the typical quality and longevity of these products.  With this one easily found online for less than $100, it becomes an attractive long-term investment and will quickly become YOUR favorite trackball “non-mouse” as it has mine.