How Do You Protect Your iPhone 4/4S Investment? I Chose a LifeProof Case

I bit the bullet and bought an iPhone 4S, the 64GB version just before the end of 2011. With that more than $500 investment and bearing in mind my new two-year commitment/contract with AT&T, I had to give serious thought to protecting that investment. I chose an $80 LifeProof case, better and different in my view.

Have you, as I, seen iPhone after iPhone with a cracked face?  Have you, as I, seen any number of well-worn iPhones in the hands of their users?  Do you, as I, know iPhone users whose phones have been damaged beyond repair and use by water, even to the point of dropping it in a toilet? One can conjecture until forever how and why it is that this damage occurred and that the user did not take adequate precautions, but their problems are not for me to solve. MY problem, ever present, is how to protect my ample investment.  A small additional expense to seal the deal, quite literally, seems altogether worth the price in exchange for the peace of mind provided for the duration of my contract.

My former go-to and recommended iPhone case has been the highly regarded Otterbox Defender, a fine choice, still.  And there are others.

All cases offering vault-like protection are designed to prevent some form of mobile phone calamity, and all come with a cost of added bulk.  This added bulk is a detractor to many users.

And then there are the vanity cases offering little to no protection against life’s mishaps, but they sure look good.  Sorry, folks, but none cut it with this user.  I don’t care to make a fashion statement in exchange for ultimate protection during the required the two-year contract period.  Pardon me if I wish to be abundantly cautious, but I like the idea of not having to worry at all about protecting that investment. Sure, I would hope to replace the 4S with whatever is newer and hopefully better before the two-year term, but to do that will require selling my 4S, getting for it as much as I can and then using that cash against the money hit for a new phone while there is no upgrade eligibility, IF I choose to not wait until my next upgrade eligibility.

And so I learned in the fall of 2011 about this new LifeProof case.  It promised to be different from all others I’d seen.  It wasn’t until I met the LifeProof founder, Gary Rayner, at CES that is all clicked for me.

Whereas all other cases protect a mobile phone from one or more elements – a damaging fall, water intrusion, dirt intrusion or ice/snow damage, LifeProof cases encourage the user to live life and not be concerned with life as regards its effect upon the contained iPhone.  Ah, that is the difference!  And there is also the very real benefit and bonus that a LifeProof case does not add bulk as do virtually all other cases with any degree of protection. It’s barely there, adding virtually no weight or additional size.

Rather than protecting FROM LIFE, LifeProof encourages users to LIVE LIFE – to swim and surf, to use the phone carefree in the rain. Go ahead and take the iPhone in its LifeProof case into the pool, even under the water a few feet, to shoot stills and videos of the kids.

Use the phone, as is, in its LifeProof case, in the snow and ice, sleet and cold weather, even strapping it to one’s arm and using the video capability to capture a downhill snowboarding adventure.

Adventurous types using LifeProof can feel free to use their iPhone 4 and 4S in the out-of-doors, camping and hiking, backpacking, on rough bike trails with the dirt and dust flying, the mud kicking up and even sand blowing all about, without concern for the iPhone in its protective cocoon.

See, just live and know your iPhone 4/4S will survive in all but the most extreme of circumstances well beyond what all but a handful of users could possibly need. If you need protection against a military tank drive-over, this is NOT your case!

LifeProof easily accepts the iPhone and closes tightly in three simple steps.  I had the new case at the ready the instant I took my new iPhone from the box after returning from its purchase and initial setup at the Apple Store.  Powered off, I wiped it down completely with a microfiber cloth.  Next, the iPhone was gently placed in the top, face side down. Using the microfiber cloth to prevent fingerprints and dust, the phone was well seated in that piece.  Next, the case bottom was carefully seated against its mating seal on the top, snapping it shut, mating all around the perimeter to the bottom. A snap close of the bottom swing door seals over the iPhone’s bottom connector. The final procedure called for installation of the sealing, screw-in cover over the headphone jack.  That was that.

Be sure to check out the available colors, too!

With the phone sealed inside, how can sound get out and my voice be heard to callers? More ingenuity.  There is a membrane over the microphone and ear speaker made of one-way breathable material.  There is no issue with sound.  And the entire case back vibrates with speakerphone sound as needed, so there is only the slightest diminished sound detected with LifeProof in place, but with better bass.

The protective covering over the front of the phone, part of the cases’ front cover itself, at first seemed to diminish the ability to enter characters on the on-screen virtual keyboard.  Now, having lived with it for several weeks, I don’t even think about it and do not feel handicapped in my data entry.

The power button on the phone’s top sits under the LifeProof case’s designed-in button space and works just fine, as do the side-mounted volume controls and ringer on/off toggle.  Pressing the home button at the bottom of the phone’s face is as if pressing it without protection. In short, all controls and control surfaces work pretty much as if there was no case in place at all.

What’s not to like?  There are two issues that may concern some users and will most certainly cause users to modify behavior.

First, the bottom connector now sits inset within the case, so docking mechanisms do not generally fit. This is somewhat mitigated by an accessory offered by RadTech, their ProCable Shortz Extender, retailing at $20, but found for a little less.  By the way, this same issue of recessed docking/power connector exists with some other cases.

Because the LifeProof case is really sealing out water in a forget-about-it way, there is also that screw-in plug over the earphone jack.  Without it in place, that is an entry point for water, a no-no. Other cases offering modest, not life proof protection use a simple rubber or silicone plug.  LifeProof seals the entire entry point at the case itself.  Unscrewing and removing the plug reveals the connector down in its well.  Taking good care to not lose that plug is essential.  The case comes with a six-inch screw-in sealing extender for the headphone jack, along with a spare plug in a keeper that snaps onto the extender cable.  I took off the keeper and have to be careful so as to not lose the screw-in plug, both of which are kept in a zip-closure plastic bag.  I can see the need to buy and keep a spare or two of these!  Every day I unscrew that plug, remove it and screw in the extender, to which I connect a wired headset. (I am NOT a fan of Bluetooth headsets, having not found any yet that are as good as wired headsets, but that is for another time.) I wear this setup as I do my daily exercises and then put it all back as it was. 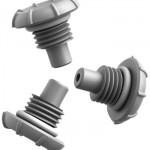 As I am not one to be on one’s mobile phone all day during the day – working from Gadget Central for the most part, this is not a problem.  When in the car, I use either a visor-mounted BT speakerphone (when call quality is not a concern) or I take out the plug, connect the extender and use my preferred theBoom V4 or the Boom E wired headsets, both offering superior sound quality over any wireless solution. Another bonus of theBoom solution is that Siri works as accurately as is possible, as does the Nuance/Dragon dictation software.  And often, I go old school and hold the phone, using it while holding it against my face!

Note that the included headphone extender is splash proof and waterproof.  For those wanting to completely submerge their LifeProof-protected iPhone, there is a Swimming Headphone Adapter available for $20 that can mate to an assortment of waterproof headphones, some of which are available on the LifeProof Site. The Swimming Headphone Adapter is not compatible with inline microphones.  Well, duh!  You’re not going to make calls while submerged.  The General Use Adapter is required while using a microphone.  All other control capabilities when using the inline button on compatible phone headsets with microphones are retained with the General Use Adapter, and lost with the Swimming Headphone Adapter. Get it now?

Photos and videos are as crystal clear, with clear sound, as without the case in place.

My commitment is to protect AND to enjoy the heck out of the iPhone experience and at the same time to not worry at all about how and where and under what conditions I am using the phone.  LifeProof has made sure there are no worries, only fun.

Users may extend the standard 90-day warranty to 365 days by successfully completing an online verification checklist.

I cannot imagine NOT having LifeProof protect my iPhone investment and I recommend the same to everyone.

Let me also offer a suggestion to parents financially responsible for their student’s eligible iPhone.  The youngest of the Gadget family is now a college senior.  As a condition of her getting a new iPhone, it was insisted that she use and diligently maintain it in a LifeProof case.  She was only too happy to comply. Now, she is a worthy LifeProof ambassador on her campus for the benefits and worry-free mindset that comes to LifeProof users (and their parents). She knows of and accepts the responsibility to maintain the headphone cap and extender. She also knows that if she fails to maintain the case integrity and if the phone fails, there will be no dad-paid iPhone replacement.  I am confident she will make me proud, as usual.  She is quite responsible and frugal, and also realizes that if her phone is as clean and unmarred at the end of its time as it was on day one, she will get more for it when she sells this one to get her next one.  I can tell you that all previous phones were dropped and quite beat up, never lasting without a problem for a two-year period.  Now, I have no such concerns.  Thank you, LifeProof, for allowing this dad to not have to worry about THIS daughter’s iPhone.