New Two-disc Special Edition Flags of Our Fathers on DVD

What a welcome change from when I was a kid!  In this digital age, movies no longer in theaters have a second life (often more profitable than when in theaters) as a DVD.

I just love the variety that DVDs offer, whether they are purchased, or rented from www.netflix.com or www.blockbuster.com.  DVDs make a wonderful gift for dear ol’ Dad as well as for grads, moms, and just about anyone.  All you have to do it look at the bins at your local retailer or online (at the studios’ Websites or online retailers such as www.DeepDiscount.com).  Some DVDs are keepers, very special content you or your gift recipient may want to own while others are best left for the rental market.

With this time of year in mind, one of my top picks as a keeper is the new release of Paramount’s Oscar® and Golden Globe®-nominated masterpiece Flags Of Our Fathers. This landmark film is available in a new, two-disc Special Collector’s Edition DVD and is also available on HD DVD and Blu-ray. 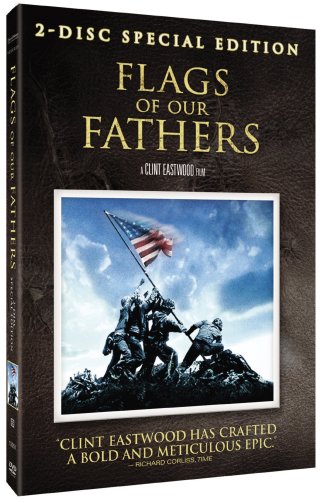 Kind of a no-brainer as a gift idea, the film was directed by four-time Academy Award®-winner and genuine national treasure, Clint Eastwood.   This amazing WWII epic explores the true story of four Marines who fought the bloody battles at Iwo Jima and were captured in a photo that became one of the most iconic images of the 20th century.

The DVD, HD DVD and Blu-ray discs feature over 90 minutes of extraordinary bonus material including an introduction by Clint Eastwood, a making-of documentary, a look at the six real soldiers who raised the flag on Iwo Jima, an examination of the actual flag raising and much more.

I watched the HD DVD version and it is nothing short of spectacular, with stunning video and theater audio to match.  There’s not much more to say besides JUST GET IT!

The DVD set retails for $37 and the HD DVD and Blu-ray sets retail for $40, but shop NOW (as in early) online as well as at local stores to find a better price.