Dad . . . DVDs Are Always in Fashion – This Year, Get Him TRUE GRIT on DVD

Have you seen the 2010 blockbuster TRUE GRIT, starring Oscar winners Jeff Bridges and Matt Damon?  Not only did I find it magnificently entertaining, I think it is among those films worthy of purchase to allow closer review and multiple viewings. 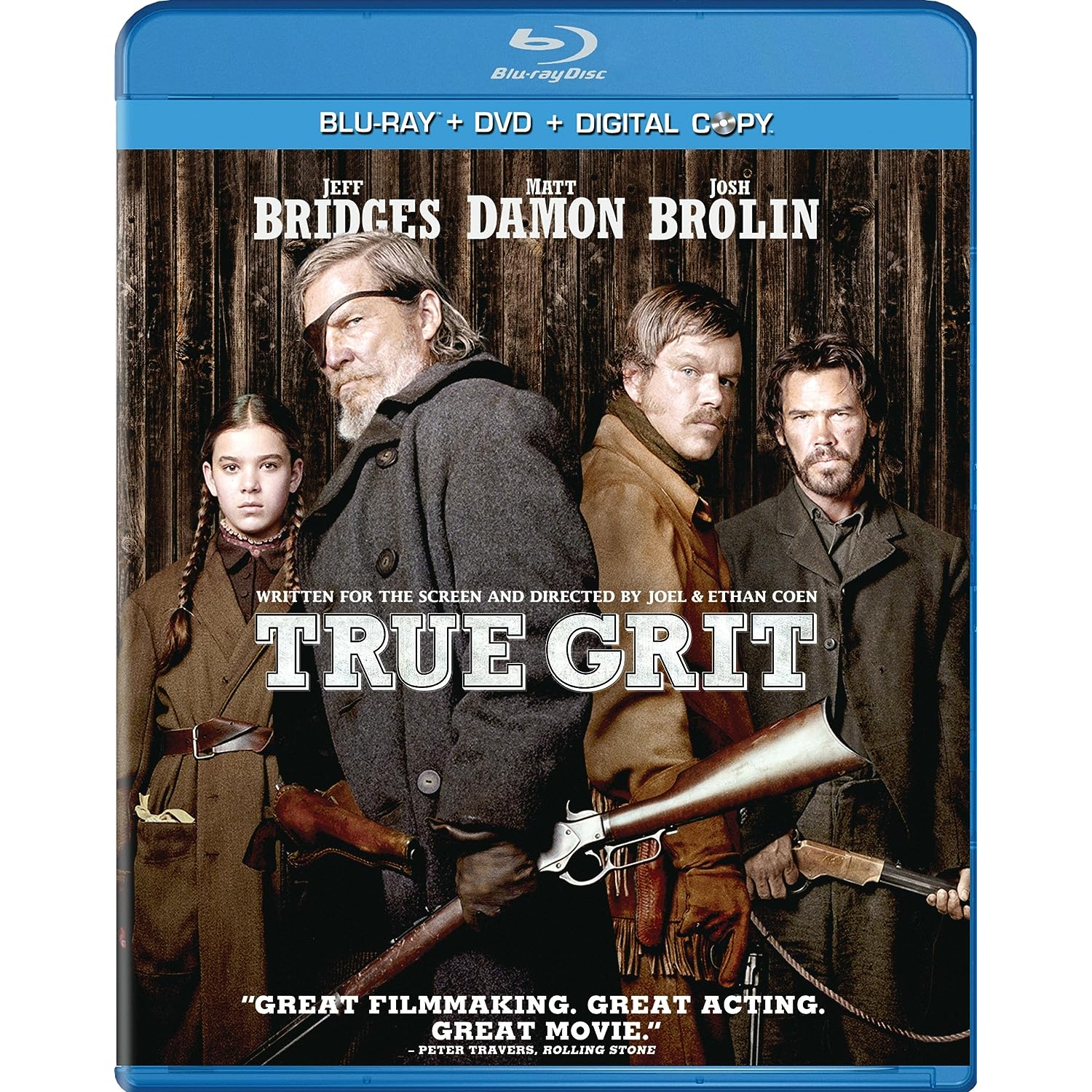 Why buy it?  The first time I was so engrossed in the story that I found I had missed much of the excellence in dialogue, sets, character development and more. I admire costuming talent, set building, direction and the work of the director and cinematographer in combining their work to create the final product.  I know from discussion with others that many shared my experience.

With the Paramount Home Entertainment release of this epic tale, we are treated to a wonderful opportunity.  Available in a Blu-ray/DVD Combo Pack, viewers get over an hour of extensive behind-the-scenes featurettes about the cast, cinematography, costumes and weapons, plus a fascinating portrait of the brilliant but reclusive novelist Charles Portis, a digital copy of the film and more.

Having one’s own DVD allows discovery of what was missed the first time around in theaters, or, for new viewers, the first-time at-home experience of this special film.

I remember the 1969 iteration of the film, which starred John Wayne, Kim Darby and Glen Campbell.  It was never billed as true to the book, and it wasn’t.  Entertaining, yes, but it was only based on the book, with dialog and character traits tailor made for Wayne’s inimitable larger-than-life persona. Watching the 2010 version, one cannot help but to come away with an entirely different feeling, as if THIS version is what the first one should have been.

In addition to the portrayals by veteran actors Bridges as Rooster Cogburn and Damon as an overzealous Texas Ranger, there is an Oscar-nominated performance by newcomer Hailee Steinfeld, who portrays a 14-year-old girl whose father was killed by an irascible cuss played by Josh Brolin.  Steinfeld’s acting chops will amaze you! Can she ever deliver dialogue!

Because Dad and others will want to watch this again and again, and enjoy the extras, this is a gift that keeps on giving.

Available just in time for Father’s Day gifting, find yours at all the usual places starting June 7, 2011, or, if you are reading this before June 7, pre-order!  I’ve just looked and found both versions best-priced at Amazon.com with the combo pack for only $18.49 with FREE standard shipping!  Amazon has the single, standard DVD version for only $15.49, so clearly the combo pack is the better value. I cannot guarantee that the price will be the same when you check, but feel free to look around for your best deal.  The retail prices for both versions are $39.99 and $29.99, but why not try and pay less!

The Blue-ray combo pack has, of course, the Blu-ray DVD (which requires that the viewer have a Blu-ray player through which to view the video).  In addition, there is a standard definition DVD with a downloadable digital copy allowing enjoyment anywhere, any time.

Sound is another element of excellence in this film.  If you have the capability of viewing in a home-theater environment, with some form of surround sound, it is going to be an order of magnitude better than if watched with “standard” sound from any TV.  With home theater setups so inexpensive today, this is yet another idea for enhancing the enjoyment of anything watched at home on the family TV.  Amazon.com is an excellent source to search for home theater systems, starting at $100.  Be sure to get at least a 5.1 Channel system.

In my view the DTS audio mix on this DVD is best (as it is on most DVDs where DTS sound is a choice), so if you have an AV receiver through which to enjoy TRUE GRIT (2010), be sure to select DTS in the sound menu.  Compare it with the Dolby mix and see if you agree that DTS’ take on the film sounds better, richer, more alive and, ultimately, more pleasing.

Clearly, I am NOT a film reviewer, as evidenced by my lame attempt above. What I am, however, is a lover of film. I know what I like. In the 2010 version of TRUE GRIT, I found much to like and recommend. If your dad (or YOU), or anyone you know is a lover of fine film, this is a great gift, sure to be appreciated, for not a lot of money.

As an aside, Dad might also like to be gifted the TRUE GRIT novel, rounding out the picture, so to speak. I found it new and as a used paperback from Amazon.com for as little as $5.40, with Kindle and other digital book editions available.  As well, you will likely find it FREE to borrow at your local library.

Rounding out the picture, here is a gift providing many, many hours of enjoyment.