Big can-type headphones fans will like these $199 (retail) BigR Audio headphones, including MLB-licensed team logo models (and other licenses) that also carry Apple’s official Made for iPod, iPhone and iPad approval. 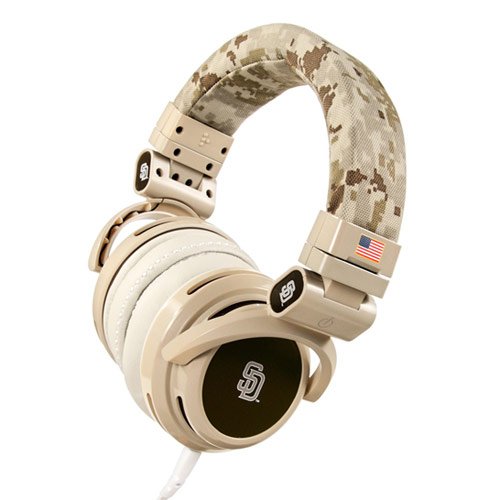 I admit up front that this style is not my personal preference, but I see enough folks with big cans on their head while out and about locally and traveling that I know this is a popular style.  Ears sweat under any phones of this style and they are bulky, especially for seasoned, regular travelers.  To each his or her own!  Yes, I know the phones target younger demographics.

I’ll soon comment briefly on the sound, but there is more to the BigR story first, one of marketing and packaging.  These phones come in a presentation case made of bamboo.  Fit and finish are good, not craftsman good, but quite good.  Befitting the size of the headphones, the box is big, about twice the height and of similar length and width as a nice box of cigars.  BigR Audio is proud of telling its story of sustainable packaging with this bamboo angle.  And the team and other licenses will attract a following, as well.

All well and good, but the sound . . . is quite pleasing. I had a preconceived idea that these would be terribly bass-heavy, but they sound quite neutral and altogether satisfying.  I sampled many selections on both my iPhone 4S and from highest quality source material on my computer.  Listening to both yielded absolutely excellent results regardless of the source.  According to Lightning Cans, the better the quality of the source, the better the result through these headphones.  I am happily surprised!

Frequency response is a nice range from all the way down to 4.7 Hz up to a respectable 47k Hz.  That wide range is mostly wasted on humans as we hear most from about 20 Hz up to 20k Hz.  The older we get, the lower that top number becomes.  Still, for those with excellent ears, it’s nice to have the range.

These headphones are designed to work best with battery-operated devices such as iPhones that do not have much output oomph.  Therefore, the impedance number is relevant. The lower the number, the less power is required to produce higher sound pressure (fancy talk for volume or loudness).  These are 24ohms headphones, so they work well with the low power output of the devices with which they will be likely used.

Not given to audiophile superlatives when describing thoughts during audio equipment reviews, let me just conclude by letting you know that I can heartily recommend these for the high quality sound.

The inline mic and controls, of course, worked perfectly, as do all such products carrying the Apple stamp of approval.

They ship in that nice presentation box with the extra touch of magnets assisting to help keep the lid closed.  And there is a soft touch bag inside to hold the product when out of the box and off the user’s head.  And the 6-foot cord with inline mic is detachable from the headphones.  Again, nice touches. They do not feel heavy on the head, either.

If you’ve got a couple of hundred dollars to spend on big ol’ headphones that make a statement with their appearance of licensed badging for certain baseball teams and other licenses, chances are good these BigR Audio headphones will be favorites.  I also noticed that users could save some money by choosing another of their products with the same sound specs, though not the baseball team tie-in.  Check out their Crooks & Castles model (named for and licensed by the trendy footwear line) with THE SAME SPECS at only $149.

Available directly through the company Website, I also found them online from a few outlets.  Search and see what can be found!