What weighs less than one pound, displays images up to 80-inches diagonally, has a built-in browser and stereo sound, has Bluetooth connectivity and Wi-Fi, opens and displays Microsoft Office and PDF files, many common video files, plays many common audio formats and more?  The approximately $450 3M MP180 Pocket Projector is the correct answer. 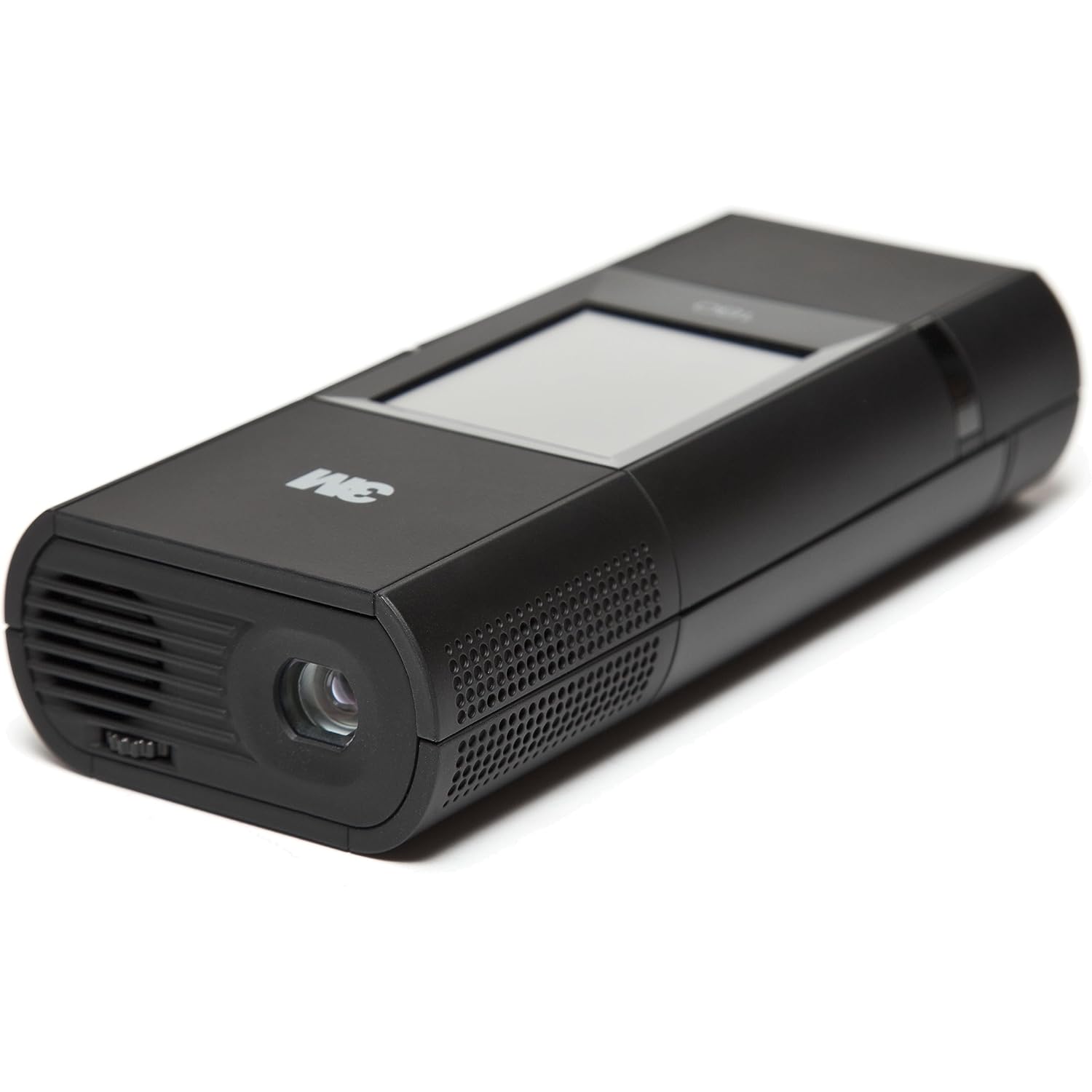 The MP180 uses LCOS technology and sends out the images through a non-replaceable LED lighting source said to be good for a nominal 20,000 hours.  At 32 lumens of brightness, it is going to be best to show its output where ambient lighting is dimmed.  However, this is about twice as bright as earlier generations of these so-called pico projectors I’ve seen.

With its supplied rechargeable battery good for about two hours use away from plug-in power, true portability is assured.

There is a top-mounted touch-screen display used to navigate and engage controls beyond the hard power button on the right side of the unit.

From that screen, settings for Bluetooth and Wi-Fi could be made, as well as selection of source material from the built-in 4GB of memory or an added, optional MicroSD card.  I inserted an 8GB card for my evaluation of the product.  The product supports up to a 16GB card.

Connected to our Wi-Fi here at Gadget Central, I engaged its virtual keyboard to search for relevant content and arrived at YouTube.  The keyboard is a bit awkward to use.  With one hand and using a stylus (really a ball point pen tip that was retracted), I moved the cursor around the screen as if the screen was a touch pad.  To select and click, one must tap at the lower left of the screen where there is a check mark in a circle. As the screen is not a true resistance-type touch screen, such as is iPhone, one must actually press with deliberation on the correct spot to signal a selection. I’d rather it was possible to connect a portable keyboard.

However, once selected, performance online was reasonable. The image on screen was too large and did not auto-scale to screen size, but I worked around this anomaly.

Stereo audio, rated at .75W through each speaker, is adequate for near-field sound.

With sufficient ambient darkness, the image is quite pleasing.

The MP180 is supplied with useful extras in addition to the two-hour battery.  As this is truly a world product, it comes with plugs for the US, EU, UK, and AUS markets.  Each simply slides on and off with a press of a retaining clip on the power brick.  Also in the box is a composite video cable with one end jacking into the projector using a proprietary connector and the cord’s other end split with the common yellow, red and white RCA A/V ends, plus double female extensions for all three.

There is a USB cable with the product end terminating in a Mini size and the outbound end having a standard-size male USB.  This is useful for hard-transfer of files from the computer.  Supported format include Microsoft Office .doc, .ppt and .xls files, as well as audio files in the following formats:  AAC, mp3, wav and amr. Supported video formats include 3gp, avi, mp4 and swf.

Native video resolution is the aforementioned SVGA in 4:3 size.  However, the projector sill accepts standard NTSC (old broadcast standard) resolutions of 480i and 480p as well as H.264, SD and HD files up to 1080i.  Before you get excited about high def capabilities, forget about it.  Those files are dumbed down to 800×600.  As this is a world product, video output can support both NTSC and PAL signals.

Finally, there is a built-in flip-out prop that tilts up the projector nearly ½ inch.  For better versatility, the projector is also supplied with a 6-inch bendable leg tripod.

Shop online as I did and found it at Amazon for a little over $400 delivered.